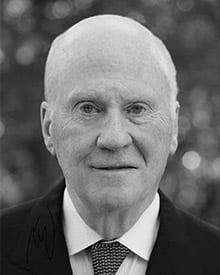 Chuck Newhall joined Greenspring Associates as Chairman of its Industry Advisory Board in 2013. In this capacity Chuck provides insight and industry expertise in the firm’s due diligence process, as well as recommendations for strategic initiatives. A pioneer of the venture capital industry, Chuck co-founded New Enterprise Associates (NEA) where he worked until his retirement in 2012.  Under his stewardship NEA became one of the largest early-stage venture capital firms in the United States with $14 billion in committed capital. Investing primarily in Information Technology, Healthcare, and Energy Technology, NEA investments have led to the creation of more than 55 companies that have achieved individual equity values of over $1 billion.

Before NEA, Chuck was a Vice President of T. Rowe Price. Prior to that, he served in Vietnam commanding an independent platoon including an initial reconnaissance of Hamburger Hill. His decorations include the Silver Star and Bronze Star V (1st OLC). He received an MBA from Harvard Business School, and an honors degree in English from the University of Pennsylvania. Chuck and his wife Amy Newhall have raised two sons, one of whom, Ashton, is the co-founder of Greenspring Associates.